To: Ambrose and Matilda Brown

Mostly an account of their neighbor Jacob Brown’s suicide. His mother found him hanging in the barn. Rachel is herself again.

I now take my pen to try to write to you again Ambrose, and Matilda, and Henry.[1] I have not took a notion to right before and now there is strange things to write about. Jacob Brown[2] is dead. He hung himself yesterday in their Barn, in the stable by his Horse. His mother[3] found him first. He went out in the morning with some grain in a dish to feed the fowls and was gone so long that his mother went to see what was the matter and there she found him dead. She run in to Ben Millers room and Ben was off to work so his wife run over two Sids[4] and he was gone out to the ______ mills. Then she went to Grangers and he was gone too so she went to Van Slikes. They was some of them at home so she got some help at last. Albert Pratt[5] had started to come here after some straw. He met Ikey(?) Wilson somewhere along by Charles Carpenters. He told him to hurry along for there was a man hung in Browns Barn. When he got there Granger and Vanslike was there too. They thought it wasn’t best to take him down till they sent for a Coroner but Albert persuaded them to take him down and carry him in the house. The blood was runing out of his nose and mouth too I think he said. Albert said he never had such feelings in his life after they got him down. The wind come up off from his stomach. He said he couldn’t help but think that he was comeing to life again. He took his linen to hang himself with. Albert says that his feet wasn’t more than three inches from the floor. He says he could reached the manger just as well as not if he had tried. Jim was up there towards night. He says that the old lady is most crazy. She says she had warning enough but didn’t think of any danger. She said that he had been to the Barn the most of two days this last week when she knew that there wasn’t any thing for him to do. She asked him what he had been at. He told her he had been busy. Friday evening he took the Bible and began turning the leaves. He begun at the fore side and turned clear through the book. One day he went up stairs and whilst he was up there she heard him make a strange noise. She tried to look up by the stove pipe but she couldn’t see anything was the matter. He come down pretty soon after that didn’t say any thing about it. Father[6] and Jim went up there today. Daniel Grandin was Coroner. Albert was one of the jurymen and Jim was one. I didn’t hear who the others was. Merryman was the doctor. Jim & Albert come hear when they got through. Mary[7] asked what they made out. They sayed they had made out that it was self murder and that was all that could be made of it. Father said there was no use of all that expence for nothing either. They had got him laid out before they come away. He had on his Cap and gloves, and he had on his overshoes over his Boots. The doctor said that his neck wasn’t broke it was bent over to one side considerable. Jim says he looks very natural now. They found some writing in his pocket. It said that such money belonged to Reynolds at Pultneyville. They searched all over the Barn to try to some other writing or something else, but they couldn’t find any thing. Albert says that they didn’t look amongst the tin in his Cart but it is no ways likely that he would left any thing there. Ward says that he heard someone twiting him about the Chains up to the Ridge the other day to Election. He is to be buried Tuesday at ten oclock, the meeting at the Methodist house to the Ridge, 22nd and he is buried there by Parsonses. His Father was buried there by Wards School house. Granger told Father it was so wet there that they didn’t like to bury there any more. Jim was in here Monday evening. He says that writing was in his trunk up stairs and not in his pocket and it was wrote in this way. You will find so many dollars in such a purse that belongs to _____ Anman at Pultneyville. Randolph Reynolds partner, Jim didn’t remember his name. It seems now that Ben Millers wife tells that she seen Jake go in the Barn and fasten the door on the outside after him. About half past eight in the morning, and about nine oclock, she heard the horse a makeing such a fuss but she thought Jake was cleaning out the stable. They think that he had hung himself then, and the horse new something was wrong. She said the horse whinerd and made a terrible fuss, but she didn’t think of any danger then you now. And then Mrs. Brown went in the Barn to feed the fowls about eleven oclock and didn’t see any thing of him, then after noon she went to look for him and found him dead. She screamed so hard that Bens wife heard her. She helped her in the house, and then went to Sids and to Grangers. They was to home there and Minerva went to Van Slikes and told them. He must hung there about five hours Jim says. Olin says he must of done it to get rid of trouble, and he has certainly now I think.

Monday, Sid and Sammy was here. They come to fetch the bags home. He says that wheat isn’t but 14 shillings a bushel now so father hit the nail on the head once. Cal come home this forenoon. Jim is drawing logs to mill. It rained and snowed a little so that it made a crust, and they can slip around with sleighs a little, but we haven’t had any sleighing this winter. Father hurt his foot some today. A stick fell on it. Tuesday, Mother is some sick at her stomach she says. Ben Atwater was here after some oats for Boradaile. Moll is here this afternoon. Sid said yesterday that Doc and Jane Granger started for the west last week. Father said if we had knew it I could went with them then so it seems that he wants me to go the first chance. Till, you wrote that Ambrose said you and Henry might come next fall. Now if you will come and stay all winter if mother lives till then I will come with Johns folks or else with Dan and Pheb and stay till you can come. Ruth hasn’t got back here yet.

Tuesday evening. I was going to try to finish this letter. We are all as well as common except Colds. Jim has got a lame wrist, but it is geting better. Jedy is not as fleshy as he was in the summer. We weighed him this afternoon and he weighs 19 pounds. Now Matilda I thank you a great many times for them things. Sarahetta makes a great fuss about sleeping with Laurie. She says that she breathes at her, and Laurie wakes her and tells stories for her, and yet she does not like to sleep with her. Johns folks are all pleased about going to the west. Father says he thinks Rachel is not verry well pleased. Rachel laughs at John some about giving more for his land in Michigan than he got for this here. And now about Uncle Stephens[14] folks. We have heard often enough, but have all forgotten whear it is. Matilda Julia is in a great quandary about going west. She says she does not feel right about going and leaving Mother. If there should any thing happen she should never forgive herself for leaving and I tell her to go. Perhaps it will be for the best. I think they would be glad to have some good help when she gets back.

[2] According to the 1850 Census records, Jacob Brown was a neighbor of Matilda’s and Julia’s brother, Sidney

[14] Stephen LeRoy, husband of Phoebe Pearsall, who was Julia’s aunt 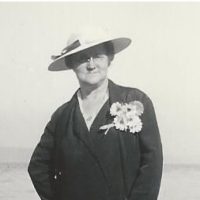